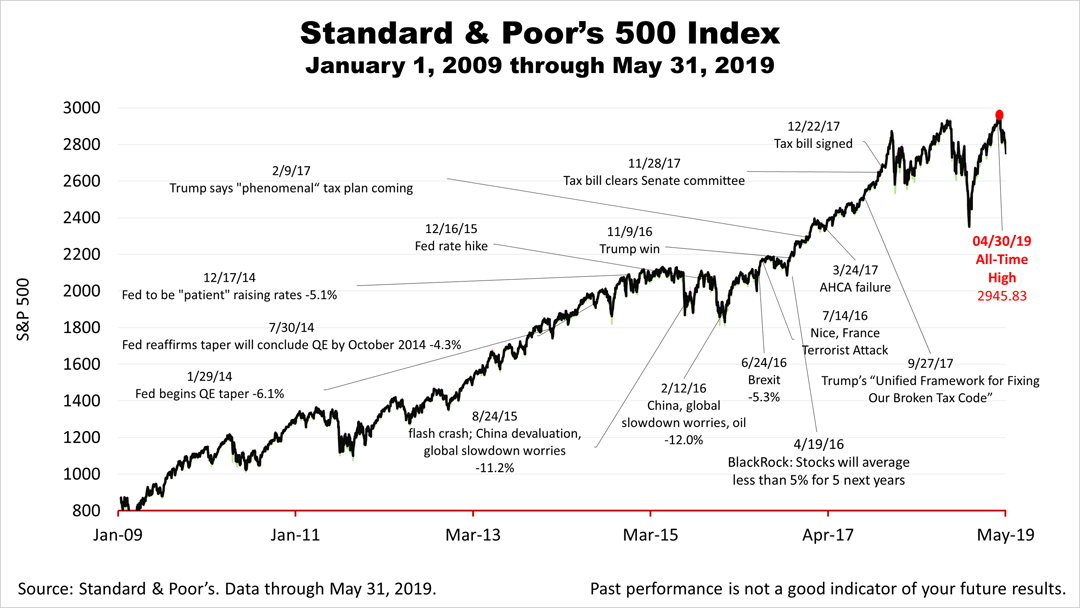 Friday's stock market drop came after President Donald J. Trump threatened late on Thursday that, unless the flow of South American migrants crossing into the U.S. through Mexico is reduced, the U.S. would impose a 5% tariff on imports from Mexico starting June 10th, which would raise the levy on goods coming from Mexico by 5% a month to 25%.

Meanwhile, the trade war with China showed no sign of being averted and the Chinese are making the dispute a point of national pride. The prospect of fighting a trade war on two fronts caused the market to slump on Friday.


The last of the three big stories affecting investors this past week was the passage of sweeping tax legislation by the U.S. House of Representatives on May 29th. Entitled, "Setting Every Community Up for Retirement Enhancement Act of 2019," the SECURE Act is expected to be passed by the Senate and has the support of President Donald J. Trump. Although the legislation may not be signed into law until late this year, individuals with retirement accounts should consider how its enactment will affect them and their beneficiaries.

Among the legislation's sweeping changes, it would kill "stretch" Individual Retirement Accounts (IRAs) and represents a move to higher taxes on IRA beneficiaries. Non-spouse beneficiaries of IRAs would no longer be permitted to defer taxes on payouts of inherited IRAs over their expected lifetime after 2019. Under current rules, you could leave an IRA to your children or heirs who may take distributions from that IRA based on their life expectancy. This can allow those inheriting IRAs to stretch the deferral of taxes over many decades, and the IRA account compounds without being taxed in this period. Under the proposed change, heirs would be required to distribute an inherited IRA over 10 years. Tax planning requires a qualified tax professional and personal attention, and while this is an early warning about an important issue affecting strategic long-term tax planning, it is not intended as personal tax or legal advice.

The economy has been expanding for 119 consecutive months, a month shy of the longest post-War expansion in the 1990s. Current fundamentals are strong, with the U.S. Leading Economic Indicators recently ticking higher, unemployment at a 50-year low, benign inflation and surging productivity. Please watch for our updates to learn details about ways to shield yourself and your beneficiaries from higher taxes on IRA payouts in the weeks ahead as well as views on the crosscurrents in the economy and financial markets.