An Early Indication The Economy Is Stronger Than Expected 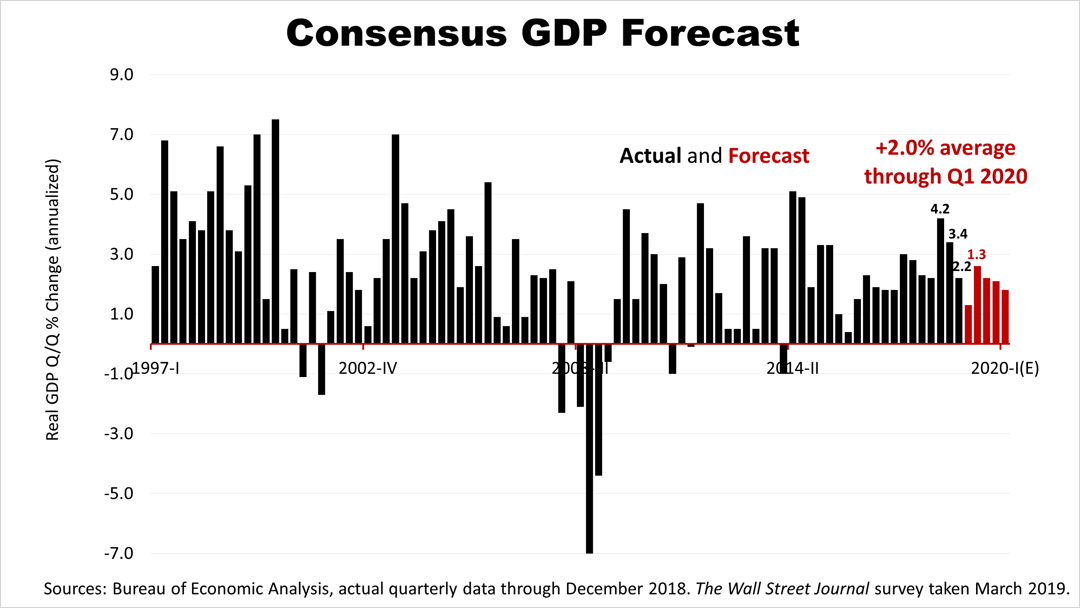 Just three weeks ago, the consensus of about 60 top economists was for a weak 1.3% growth in the first quarter of 2019, but the early indication of a good surprise has appeared. 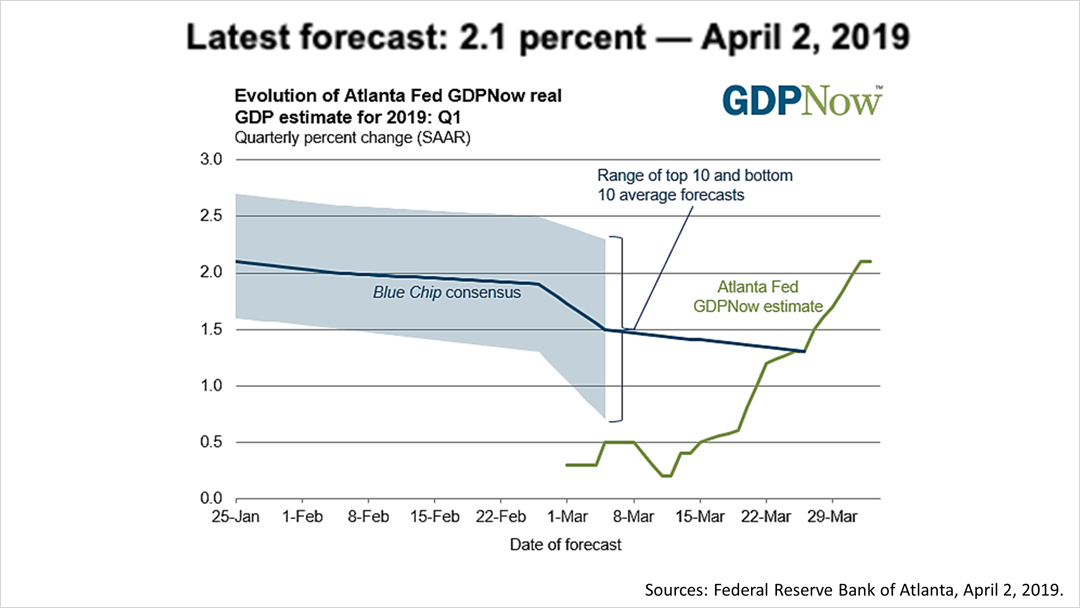 Throughout every quarter, the Federal Reserve Bank of Atlanta estimates GDP growth dynamically based on publicly available data until the release of the actual GDP figure three weeks after every quarter ends.


The Atlanta Fed's GDPNow forecast is designed to grow more accurate in the closing days of every quarter and in the three weeks after every quarter, before the actual GDP figure is released by the Commerce Department.

With the first quarter over and the release of the actual figures only two weeks away, the GDPNow estimate for first-quarter 2019 growth of 2.1% is much higher than the 1.3% consensus estimate of the 60 economists polled just three weeks ago by The Wall Street Journal. To be clear, the actual GDP figure to be released in three weeks may be 60% higher than the consensus forecast! 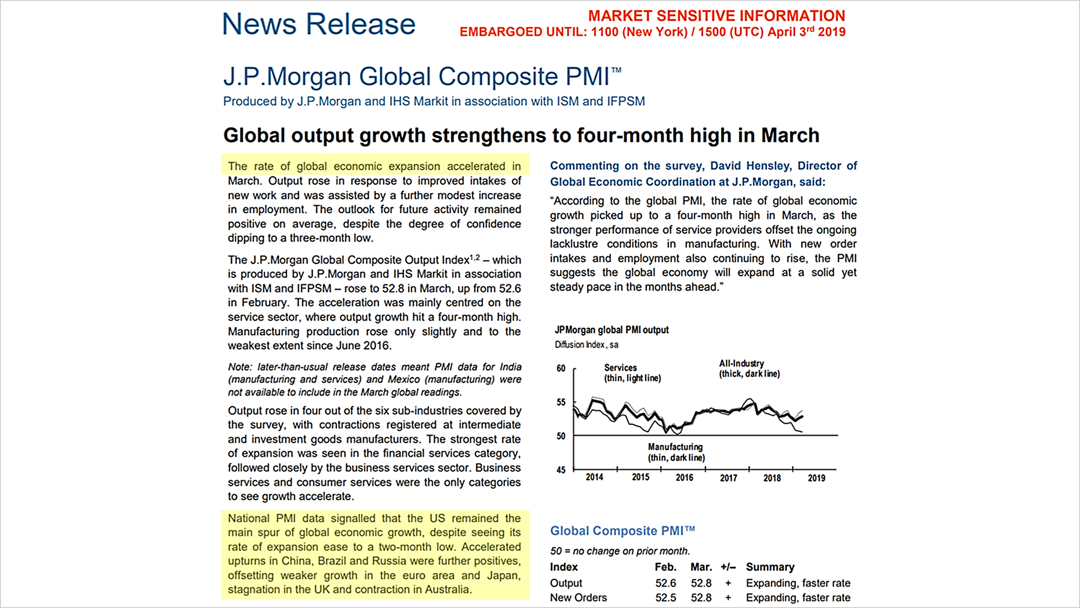 Moreover, the U.S. usually leads economic shifts and the global economy is showing early signs it could follow the surprise in the U.S.


The J.P. Morgan Global Composite Purchasing Manager's Index accelerated in March, the worst of economic news to come out of Europe as well as China could be behind us, with a trade war with China starting to look less likely. 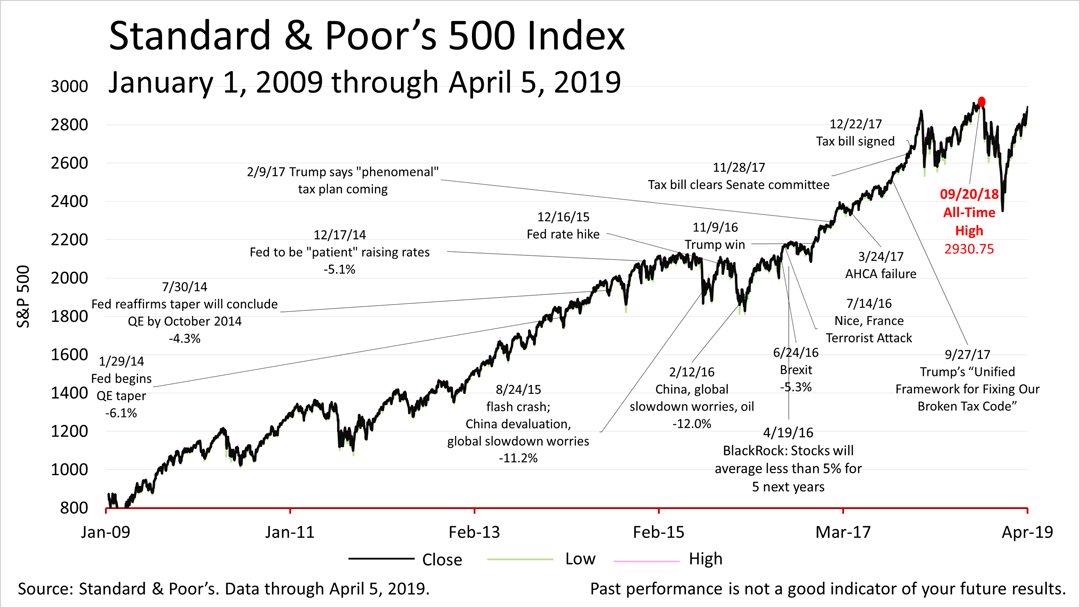 A key growth investment in a broadly diversified portfolio, the S&P 500 index suffered a 19.8% plunge between September 20th, 2018's all-time closing high to the Christmas Eve closing low of 2,351.10.

This article was written by a veteran financial journalist based on data compiled and analyzed by independent economist, Fritz Meyer. While these are sources we believe to be reliable, the information is not intended to be used as financial or tax advice without consulting a professional about your personal situation. Tax laws are subject to change. Indices are unmanaged and not available for direct investment. Investments with higher return potential carry greater risk for loss. Past performance is not an indicator of your future results. No one can predict the future of the stock market or any investment, and past performance is never a guarantee of your future results.